One and the only – Each Individual Handcraft Crystalline Glazed Lamps

​I make hand thrown, crystalline glazed porcelain focusing on bowls and vases, the shape of which complement the jewel like quality of the crystalline glaze. I enjoy creating large, bold, forms that are functional, using traditional Greek, Etruscan and Roman pottery as a source of inspiration. The crystalline glazes I use add to the individuality and uniqueness of each piece, created by the crystal formation in the molten glaze. The glazes are unpredictable and mesmerising, creating differing combinations of shape and colour at every firing. I was trained as a potter at Prinknash Abbey in Gloucestershire where I completed a three year ‘throwing’ apprenticeship, before attending St Pauls College in Cheltenham, followed by several years teaching ceramics. I then took a different path, spending 34 years in the Police service, ending up as the Chief Constable of Wiltshire. During that career I continued with my love of ceramics, developing my throwing and ceramic skills from a small workshop. Now I have retired I am able to return full time to ceramics specialising in crystalline.

Crystalline History & Process
The Sung Dynasty (960-1279 AD) produced ancient Chinese oil spot glazes that contained small crystals in them, although growing the crystals was unplanned and unintentional. Later in 13th century China, during the Ming Dynasty, crystals were again accidentally formed. As far as written records show, there were no other attempts to continue crystalline experimentation in the subsequent dynasties.

During the Art Nouveau movement, near the end of the 19th century, the style of a single glaze on a simple form began to have an appeal. The crystalline glaze was seen as something new, and possibly profitable, if it could be refined and controlled. Although advancements were made in Europe into the first decade of the 20th century, nearly all crystalline work stopped at the beginning of World War One.

​The challenge was taken up again in the late 1980s by studio potters in the UK and North America. Most notable being Peter Ilsley and Derek Clarkson. The advent of programmable electric kilns made the process more attainable, although still incredibly difficult and time consuming. However, the stunning crystal shapes combined with simple ceramic forms drew public attention and the number of ceramicists using the medium increased slowly to the current day where there are a small band of enthusiasts across the world. In the Uk there are a handful still producing crystalline ceramics.

​Process
Making crystalline ceramics is a complicated process which demands experience, experimentation, dedication and above all patience. Porcelain clay is favoured because of its purity, despite the difficulty it presents when throwing on the potters wheel. The surface of the finished from needs to be smooth and free of throwing lines to ensure that the crystals grow and simple flowing forms seem to work best with crystal formation.

​The porcelain is biscuit fired to about 1000 degrees centigrade to aid handling before the crystalline glaze is applied. Crystalline glaze recipes consist of various Frits, Zinc, Titanium Oxide and metal oxides to give colour to the crystals and the ground. Because crystalline glazes have to be very fluid when the top temperature of 1280-1300 centigrade is reached, a catch bowl has to be made separately and attached to the bottom of the piece, to catch the glaze run off. Without catch bowls the kiln shelves would be ruined every firing.

​Crystalline glaze is then brushed by hand onto the piece, up to 3 cm thick, which takes several coats, before being placed in the kiln for the second glaze firing.A fast fire to about 1280 C is followed by a fast cool to 1100c. The final phase is gradual down ramp to about 1000c. In all the firing process can take up to 20 hours.

Once cool the kiln can be opened and the ware removed. The catch bowls are cut off using a blow torch and the bottoms of the pots ground smooth on a carbon disc. The item comes with an original box and will be dispatched within 3 working days after the payment has been received if the delivery required
Delivery Cost within mainland UK for this item – £11 incl. insurance 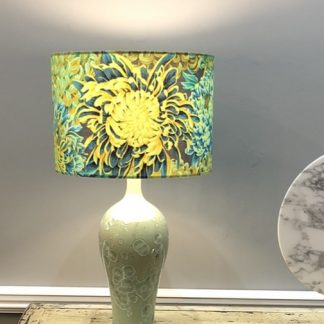